skip to main | skip to sidebar

It remains the only perfect game ever pitched in the World Series, Don Larsen's 97-pitch, 2-0 gem over Sal Maglie and the Brooklyn Dodgers on Monday, Oct. 8, 1956 at Yankee Stadium.

Now we discover that two home movies exist, shot by amateur filmmakers in the stands that day--images that have rarely if ever been seen by the general public. ("Still Perfect After All These Years," New York Times, Dec. 9, 2007).

Remarkably, there's another filmed document that focuses on the event, one that appears from time to time on late-night cable channels that feature classic TV shows.

What's My Line was a Sunday night staple in American homes from 1950 to 1967. Every episode featured two contestants, each with an unusual occupation--a birdbath salesman, a chimney sweep or the like--which the WML panel tried to guess by asking questions that could elicite only yes or no answers. And each show featured a celebrity "mystery guest," for which the panel was blindfolded.

"Mystery guest, will you enter and sign in please," intoned WML moderator John Charles Daly, and from behind the curtain emerged lanky Sal Maglie, the Dodger pitcher who would oppose Larsen and the Yanks the very next day.

"He looked like he came to kill you"--those are the opening lines of Judith Testa's biography of Maglie, and truer words were never writ. Dark and gunslinger-gangly, Maglie seemed always to be sprouting an 21-hour beard.

And mind you, that's not why he was known as The Barber. That sobriquet was earned for hurling pitches high and tight; batters digging in against Sal got the inevitable close shave.

Maglie took his seat alongside Daly and the game was on."Do people feel better after they come to see you?" asked Rizzuto.

"Sometimes," deadpanned the laconic Maglie, and the audience howled.

Subsequent questions quickly established the mystery guest was a ballplayer. "If Mr. Rizzuto were playing for the Yankees, where he belongs, would he ever be nervous about you?" asked Francis.

"I don't think so," Maglie said, and again the audience laughed. Francis leaped for the kill:
"Are you a member of the inevitable Dodgers? Are you known to pitch now and again? I think we all know who this is. Shall we say it together?"

And the panel responded in unison--"Sal Maglie."
As applause faded Maglie said, "Hey Phil, without the blindfold you'd recognize me right away. I'm wearing the outfit I got the other day from your store."

Maglie stood and opened the lapel of his sport jacket. (Hard to believe now, but pro athletes in the 1950s did not earn so extravagantly they could afford to lounge off-season; Rizzuto and Yankee catcher Yogi Berra worked winters at a clothing store on Broad Street in Newark. Maglie, like all celebrity mystery guests, earned $750 for his WML appearance, at a time when the average major league salary was just under $15,000).

"What about tomorrow, Sal?" asked Cerf. Four days earlier, Maglie had pitched the Series' opener, winning 6-3 behind home runs from Jackie Robinson and Gil Hodges, outdueling Whitey Ford and surviving homers by Mickey Mantle and Billy Martin. Cerf--indeed, all of New York and most of America--knew Maglie would be squaring off in less than 24 hours against Larsen, the Yankee journeyman.

"Well, like I've always said," Maglie answered, "I'm gonna give 'em all I got. We got a great ballclub"--and here Brooklyn fans in the audience made themselves heard, naturally--"and let the best team win."

It was left to the urbane, euridite Daly to sum up the proceedings: "I know I speak for everybody here. I don't think there's anybody who doesn't get a kick out of what you've done, the way you helped Brooklyn win the pennant with a shutout and winning that series game."

Shutout? Shut your mouth, John Charles Daly! It was a no-hitter, for your information, that Maglie threw against the Phillies on the last week of the season, clinching a tie for the league title.

"I was telling Phil earlier," Daly continued, "the only time I want to see the Yankees lose is when you're pitching."

"I hope it's tomorrow," Maglie said.

Well. We all know how that turned out. 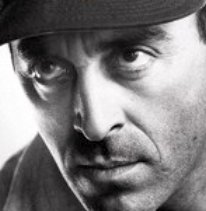 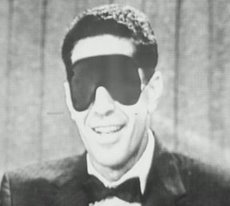 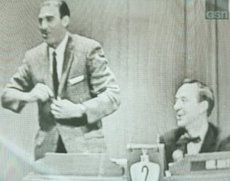 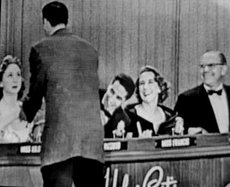 FIRST PHOTO: Sal "The Barber" Maglie: He looked like he came to kill you.

THIRD: Retired Yankee shortstop Phil Rizzuto was on a member of the panel this night. Six years earlier, on Feb. 2, 1950, Rizzuto appeared as the mystery guest on the very first telecast of WML.

FOURTH: Maglie shows off his suit to the panel as John Daly looks on.

FIFTH: On his way into the history books, the Barber says good-bye to the WML panel. From left: Dorothy Kilgallen, Phil Rizzuto, Arlene Francis and Bennett Cerf.